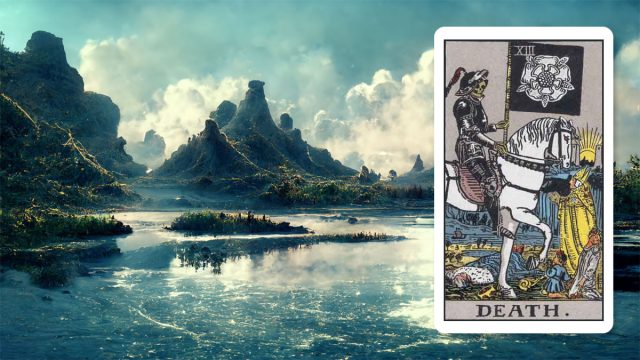 The Death tarot card is often used in movies to create suspense and foreshadow a tragedy, but this card’s meaning is far from scary.

Death is one of the most misunderstood cards in tarot. It portends dramatic change.

Over the centuries, tarot card designers have done little to quell the stigma around the Death card. Only recently has the art associated with this card become less sinister.

When the Death card appears, pay attention. Although it doesn’t foretell a death, there is bound to be an extreme change coming soon.

The Death card indicates major transformation and milestones associated with embracing dramatic new opportunities are on the horizon.

Most standard tarot decks used macabre symbolism to depict the Death card archetype. Skeletons, Grim Reapers, and a distant sunset appear on many versions of the Death card.

Modern symbols have broadened how this card depicts the archetype or transformation. Some decks include imagery of rebirth on the Death card. Snakes, eggs, and symbols of growth and initiation relate to the Death card.

The Death tarot card meaning suggests you are about to undergo a significant change that shifts your perceptions. This is a card of growth and transformation.

The Death card is also symbolic of cycles and seasons of change. Autumn and Halloween are associated with this card. Ravens, skulls, and other imagery related to facing your fears and gaining wisdom.

Deities associated with Death, the afterlife, and rebirth are symbolism for this card in some decks. The Death card may feature Hades or depict a journey into caves or tunnels.

When the Death card is upright in a reading, you will experience a major life-changing event that transforms your perspective and awareness. The only “death” is the loss of innocence and illusions.

You are about to learn valuable lessons that quicken your growth and maturation, leading you to become wiser while possibly compelling you to release your past assumptions.

The Death card depicts an experience that permanently changes you, though not in a negative. You are about to grow in new ways and learn from experiences that awaken you in such a way that ignorance is no longer an option.

The best Death tarot advice regardless of your question is to be open to embracing growth and change. You must let go of past expectations.

The Death tarot outcome you can hope for is empowerment and confidence in a new chapter in your life. You may be open to new wisdom and your experiences can change your outlook and identity.

Read more about Major Arcana: The Lovers, The Star, Temperance, The Fool, and The High Priestess.

The Death tarot card meaning in love suggests you have come too far to let a relationship limit you.

Your partner must evolve with you or the relationship will not last. You will typically see the outcome in your relationships within a year.

Death, compared with the Tower in tarot, does not usher in a sudden change. Instead, Death indicates you are navigating a process. The Death card in love can signal a new love coming into your life.

This card indicates transformation on the horizon and often appears when a couple is expecting a new baby.

When Death appears in a marriage or love reading, it can mean the “death” of the couple’s concern only with themselves as they prepare for parenthood.

The Death card appearing in money and career reading suggests you must make significant changes to your professional identity. You may have to rebrand yourself in business or undergo a dramatic career change.

The Death card can suggest a loss of money or loss of a job, but when this is the case, it is because you needed to embark on this change and would not have done so on your terms.

When Death shows you are losing a job, it is because you must take a new path in your career and thus should not be considered a negative omen.

The Death card concerning money suggests you must transform your attitude toward money. You may be hoarding money or giving money too much power. If so, a loss teaches you to let go and start over.

When the Death card appears in a health reading, it can be startling. Yet this is not an indicator of poor health. Usually, it means you must make dramatic changes that improve your health.

The Death card is often a warning. Adopt new routines or diets that benefit your health but also relate to a new outlook and identity, such as becoming engrossed in a healthy sport or vegetarian diet.

The Death card may indicate you are about to receive news that you must take seriously, for example, a red flag that your health may change if you don’t change your habits. Yet Death usually indicates you have time to transform your path.

You may awaken to your psychic gifts in the coming year. You may have a gradual series of epiphanies that lead you to make significant changes to your lifestyle. You may become more spiritual when this card appears.

When the Death card appears, you may also be summoned by ancestors and spirit guides. Your spiritual quest may involve accepting mortality and connecting with the souls of the departed.

This card can also be an invitation to meditate on the afterlife more. You may be getting a message to embrace transformation as a part of your spiritual journey in the coming months.

When the Death card appears with the Moon tarot card, its meaning is enhanced. You may be opening up to spirit communication and mediumship. You should pay attention to your dreams, which can be prophetic.

Reversed tarot card meanings are not a reason to fear. They indicate delays, disruptions, or avoidance of an important lesson associated with that card.

When the Death card is reversed it doesn’t mean the outcome is suddenly negative. Instead, this means the energy or lesson is being dismissed, ignored, or resisted.

Upright Death symbolism involves embracing change, and personal transformation, so reversed Death symbolism means trying to cling to the past and avoid an inevitable change.

When the Death card is reversed, you may ignore signs and red flags. You are making life more complicated by resisting change rather than embracing the inevitable.

You may be choosing illusions rather than facing the truth when the Death card appears reversed. Ironically, by avoiding necessary change you are also missing opportunities for empowerment.

The reversed Death card is similar to the Temperance tarot card meaning. You must adapt to a gradual change that you may not feel ready for yet.

When the Death card appears reversed in love and relationship readings, it can indicate you are afraid to see the truth of a relationship. You may need to grow and leave a relationship behind yet cling to the past.

You may be ignoring red flags in a relationship, or a relationship may be over, but you are going through the motions because you don’t want to accept this loss.

The reversed Death card in a love and relationships reading can also indicate a couple who desires growth and change, for example, marriage or children, but who are not yet ready.

When the Death Tarot card appears reversed in money and career reading, you may be trying too hard to change your career before you are ready for the responsibilities involved.

You may be trying to launch a business or professional career before you’ve set the best foundation, for example. The Death card reversed in a work reading can also show a change is needed, just not yet.

Follow signs and synchronicities when this card appears reversed. You may be getting an advanced warning that you’ll be ready to start a new chapter in your professional life in a year.

Money may be a challenge when Death appears reversed. You may be trying to start over with a clean slate, but you’re not yet ready. Work on reconciling old debts or declaring bankruptcy so you can start fresh.

The Death card appearing reversed in a health reading indicates you have had red flags and need to change your routines, but you’ve been ignoring the signs.

Pay attention to the advice you’re getting related to diet and lifestyle. You may get warnings about slowing down, being careful, sleeping more, or giving up bad habits.

The Death card reversed is important if you have been grappling with addictions or health risks that require changes. You must take the warning signs seriously and commit to a new path.

When the Death card appears reversed in a spirituality reading, you are ignoring messages from your loved ones in the spiritual realm. You may have to change your routines or evolve personally now.

The reversal indicates a refusal to adapt or resistance to needed changes. You may be outgrowing a spiritual path, dogmatic belief system, or cultural practice.

Avoid zealous leaders and cults when the Death card appears reversed to guide you about spiritual matters. You may be mistrusting your intuition and giving others too much power.

Welcome to Tarot Ash. Since I was a kid, I’ve always been fascinated by Tarot readings and the occult. I share my experience and knowledge on this website, as a modern witch.
Topics
Recent Articles