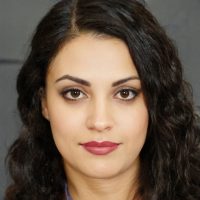 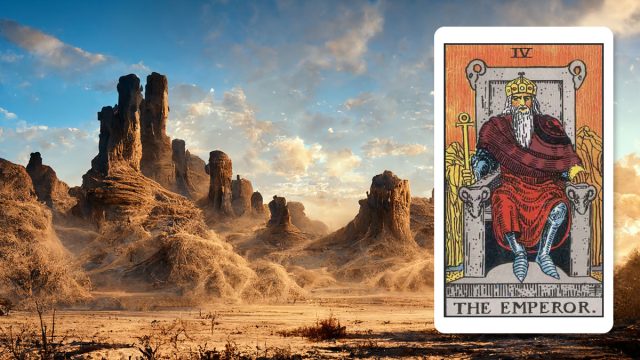 Your protective instincts and boundaries are needed when the Emperor tarot card appears in a reading.

The Emperor defines expectations and gives direction. When you select the Emperor tarot card, you will endure a period of empowerment.

You must show initiative and lead others, but your power also means you have responsibilities to fulfill. The Emperor reminds you to take commitments seriously.

You may be protective of your territory when the Emperor appears. You can be determined and strong but you don’t need to be dominating.

The Emperor is a powerful man sitting on a throne. Ram’s heads are associated with the Emperor tarot card zodiac sign and adorn the arms of the throne in traditional tarot cards.

The Emperor wears a red robe and crown. His foot emerges from beneath the robe, revealing a knight’s armor. Thus, the Emperor is a warrior-king.

The Emperor may be seated with a staff in one hand or a sword. He is powerful yet calm and observant. The Emperor’s throne is on a marked slab, suggesting boundaries and protecting territory.

Different variations on the tarot portray the Emperor in different ways. He may be a CEO, King, or benevolent ruler; the Emperor’s symbolism conveys power and wisdom.

The Emperor’s tarot card meaning conveys strength, power, and protection. The Emperor is grounded and unyielding, suggesting you must stick to your ideals and not compromise your integrity.

Like the Emperor card, you can project an image of power and stability that others respect. You can win in battle but also exert wisdom by knowing what battles to choose.

The Emperor in the tarot represents a respected leader. Your leadership skills may be in the spotlight when this card appears. You may have the charisma and fortitude to be a champion for others, yet the Emperor’s wisdom lies in knowing how to leverage his power.

You don’t have to bring your arsenal to the table. The Emperor tarot card as advice tells you to use as much energy as you need to influence others. The Emperor teaches you to set boundaries and command respect from others.

The Emperor tarot card yes or no readings affirm your desires and goals. The Emperor indicates a yes answer and teaches you to use assertiveness and confidence to manifest your goals.

When the Emperor appears in a tarot card reading, you must find ways to protect what you value without being dominating or zealous. Power can go to your head, and the Emperor teaches you to use power judiciously.

Read more about Major Arcana: The Lovers, The Devil, The Hanged Man, Temperance, and The World.

The Emperor tarot in love shows a protective partner who may be masculine and powerful. You may fall in love with a leader. Someone of status and wealth may be your future partner.

You may also have to work on boundaries and self-respect in a current relationship. Protect your interests; the Emperor reminds you. You can show love and affection by nurturing a stable foundation.

The Emperor tarot card meaning in love can teach you to stand up for yourself and be assertive in a relationship. You may have to lead others and show initiative, guiding your partner to success.

The Empress tarot card is the Emperor’s mirror. When these two cards appear in a romance reading, suggesting you are part of an ideal partnership or relationship. Your partner may be your soulmate.

Other tarot cards surrounding the Emperor can give nuanced meanings in a love reading. The World tarot beside the Emperor indicates you are evolving beyond self-centeredness and learning to prioritize a partner or family.

When the Emperor appears, you can use your authority and wisdom to advance professionally. You may succeed in leadership positions, and others look to you as an example and authority figure.

You may have an opportunity at a new job run by someone firm but fair. Your protective, responsible, conscientious nature can help you succeed in your career now.

Your finances can be stable though this is not an ideal time for significant financial growth. You can maintain the status quo and protect your investments and assets when the Emperor appears in a money reading.

When the Emperor tarot card appears in a health reading, you have good vitality. Your health is stable; you may regain strength after an illness or injury, and your recovery is underway.

Your health may improve even more if you work on strength training. Your physical stamina is good, and you have solid routines supporting your health and growth.

When the Emperor tarot card appears, you may need to be assertive about your healthy routines. Maintain your healthy lifestyle and resist temptations to act in reckless ways.

You can lead others as a role model or inspiration for healthier choices. The Emperor tarot card encourages you to use your charm and optimism to help others become healthier.

Your spiritual practices can benefit from repetition and practice; set boundaries around meditation time and other spiritual self-care routines. You may find guidance from a charismatic spiritual leader.

Avoid giving power away and remain grounded when the Emperor card appears. You may have to assert your spiritual needs and protect your rituals and routines from disruption and interruption.

When the Emperor tarot card reversed appears in a reading, you are not using your power effectively. Power may go to your head, and you may try to control or dominate others.

Work on using discretion and fairness as part of your leadership style. You may be trying too hard to influence others instead of leading by example. Avoid being demanding and try to appeal to others’ desires and passions.

The Emperor reversed can also suggest you are influenced by a controlling or powerful person. Work on assertiveness and boundaries when this card is reversed.

You can restore balance and channel your power and status if you pay attention when the Emperor appears reversed. You must reconsider your strategies and avoid wasting energy.

The Emperor’s tarot in love brings a message of assertiveness and protection. Yet when the Emperor is reversed in a love reading, you may be giving up power.

A dominating partner may intrude on your boundaries. Avoid controlling relationships and strive to keep balance in your partnership. You may be ignoring sound advice from someone who loves you.

Your power is ignored. You may have to work to resume control and authority. You may need to assert boundaries and command respect in relationships rather than ignoring infractions.

The Emperor tarot card reversed in money or career reading indicates a lack of power and authority sabotaging your finances or career. You aren’t taking initiative or refusing to act as a leader.

Shirking responsibility or shying away from leadership causes you to miss chances to grow and advance. You may have to challenge yourself so your career can expand.

You may also feel stifled by a controlling boss or work environment. Take the lead in seeking new work that allows greater freedom and autonomy. Self-employment may be a future option.

Your finances are stifled by a lack of boundaries and control in relationships. Allowing someone else to control your decisions is hurting your finances. You may struggle to set limits, and this hurts your savings.

When the Emperor appears reversed in a health reading, you must set boundaries and take control to resume health. People-pleasing and lack of priorities cause your health to suffer.

You must take charge of your routines and work to make health a priority. You may have lower energy and stamina than usual. The Emperor reversed suggests you must work to protect your healthy choices.

You are giving your power away, costing you energy and physical stamina. You must resume control and protect your interests. Assertiveness and boundaries help you restore health.

When the Emperor appears reversed in a spirituality reading, you may lose ground and allow others to control you. Distractions hinder your spiritual connection.

Control issues and power struggles lead you to become dominating and brings out your egotistical nature. Work to restore the balance between ego desires and spiritual needs.

The reversed Emperor card suggests you are losing perspective and becoming too self-centered. Work on releasing control and being open to spiritual lessons on synchronicity and faith.

Welcome to Tarot Ash. Since I was a kid, I’ve always been fascinated by Tarot readings and the occult. I share my experience and knowledge on this website, as a modern witch.
Topics
Recent Articles